The shortest stint of teaching that I had was at this school - but what an eventful experience!

It was a small, private, secondary school for boys in the upper floor of a building with a temple downstairs.  The location was off Forest Road, between the Parklands and Pangani area.  At present the whole map of roads in Nairobi has changed because of new bridges and fly-overs.  That time, the roads were narrow and many were not even tarmacked.

The owner of the school was Mr. Goswami, a dashing old bachelor [sorry - teenagers find everybody else old!] who was a thorough gentleman with a charming and pleasant personality.  Most of the teachers, including me, were 'A' level school leavers who were trying to keep busy while waiting for their results and admission to universities for further studies.  The salary was hardly Kshs.500/- per month and the work load was enormous.  There was hardly any 'free' lessons.

Lunch was the only time the teachers were together in the small staff room where they had their home cooked food in their 'cubicles'.  They were all friendly and vivacious, wanting to enjoy life.  A couple of them had their own cars.  Once we all got packed into the cars and went to our old schools to collect our School Leaving Certificates and Testimonials required for University registrations.  Another time we all went to see a colleague's sick mother in hospital.  Some times we would play a singing game 'antakshri' with the hit, romantic hindi songs of that era. The respectable, young men often flattered the few lady teachers around to keep them smiling and happy in the otherwise dull environment.

The class rooms were small, had only basic furniture and were full to the brim with students.   Teaching was just 'chalk and board'.  There were no laboratories. We all tried to make the best of whatever resources we had and helped the kids to enjoy the lessons.

Students at this school were mostly meek, young lads, eager to learn and gave no disciplinary problems at all.  They were obedient, obliging and showed a lot of respect, especially for the female teachers.

I was teaching Science and Maths. I loved my job inspite of the huge piles of exercise books to mark and hardly any special facilities for the women around.

We were living in Nairobi West at that time, so I used to be dropped early in the morning and picked by my Dad, late in the evening.  In the middle of the term, the 'A' level results came out. We had all got through, although not with the flying colours that we had wished for.  I got a letter of admission for Veterinary Science at the Nairobi University.  Soon, most of the staff members were going to be dispersed as every body was to follow their diverse career paths.

One of our colleagues, Rajesh, who later became a Doctor, threw a fare-well party at his house as it was also his Birthday.  I managed to coax my parents to allow me to go. They were hesitant at first, as they were strictly conservative and did not want their girls going out in the evening.

The party was a simple gathering of family and friends, with the cake cutting ceremony, games and singing in which I sang 'Jub tum mujhe apna kehtey ho..'  One of the colleagues who had a car was to drop us at our houses after the party.  On the way, they stopped in town, for passion fruit juice and coffee at 'Exotica', the famous hang-out place for youngsters at that time.

I was getting anxious as it was almost 9 p.m. and my parents would be worrying for me.  When I reached home, I got a good shouting for being late. No one wanted to consider that I had no choice as I was being dropped by somebody else who had a car.

Nobody had ever shouted at me before.  I could not sleep and I cried the whole night.  I asked my wet pillow what I had done wrong.  In the morning, at school, I could not concentrate,felt confused and jittery as I sat in front of the heaps of books that were to be marked.  I felt dizzy and passed out.  I could hear people rushing around to help me but I couldn't speak or open my eyes. They took me downstairs to a car and drove to my house. I was in a daze and felt too weak to answer any questions being asked by my parents.

I was still dizzy. I felt as if I had been locked up in a room and was being bombarded with cruel words. I imagined somebody was hitting me with thudding blows on my head - I slumped into a complete black-out and stayed oblivious to this world for more than six months.

When I finally woke up one day, I was in front of a mirror in my room - my face seemed different, my eyes were swollen.  I asked my sisters what had happened - I had had a nervous break-down and had been in and out of hospital for the past few months.  I could not recall much, just a hospital bed, injections, a long dining table with mashed potatoes and H.P. sauce.  I remembered a kind doctor called Dr. Mustapha.

Slowly, I regained my energy and went to attend the Veterinary Science classes for which I had been registered at the Chiromo campus of Nairobi University.  But I could not concentrate, felt repulsed at dissecting huge cow parts and ultimately refused to go for the course.

My parents thought a complete change of atmosphere would do me good so my sister and I were sent to Pakistan to pursue a Bachelor of Science degree course at the famous Kinnaird College, an affiliate of Punjab University, Lahore.

It was a blessing in disguise. The different environment of the hostel, the new city and the beautiful country of Pakistan brought me down to earth again.  My sister was always there for me to see that I did not get upset with anything and throw tantrums.  We were each other's support, had an adventurous and fulfilling time in Pakistan, where we stayed for almost 3 years.  We returned to Nairobi as Graduates ready to face further challenges of life. 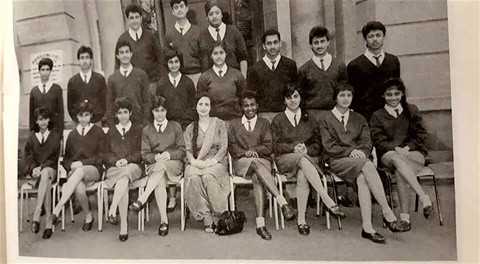 Wow! An awesome article that,about Central School. Very nostalgic as THAT was my School,class of 1976.I remember Mr Viri Goswami,the School proprietor.

Great! Keep in touch on Google+ or email.